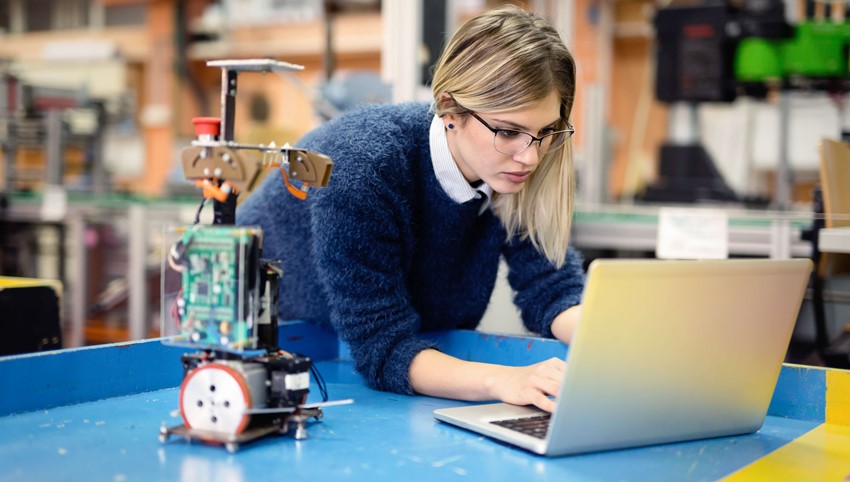 What do the students think?

The majority of responses were from Mechanical or Aerospace engineering students (59%), and 66% of all responses came from male students.

All the students from this survey estimated that their class was made up of at least 50% male students, with three quarters of students guessing that only 0-20% of their classes would be female. Despite this, 80% answered that they were aware of campaigns to increase the proportion of women studying engineering. These included fantastic well-known organisations such as WIE, Insight, Athena Swan, This Girl Can, Robogals, and WISE. 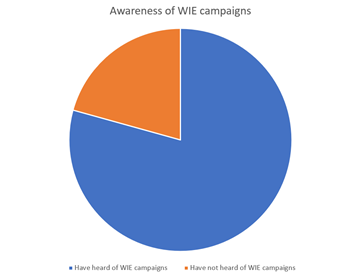 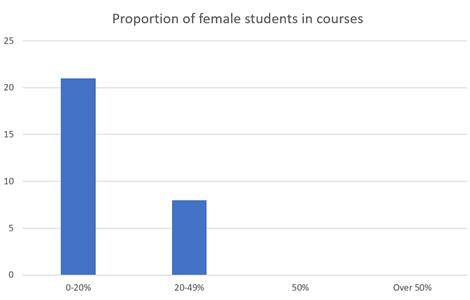 However, if Women In Engineering messages are reaching 80% of students, but there are still less than 20% of women on the majority of these University courses (see above), should these projects be doing more to encourage women into Higher Education engineering? Or should there be a different approach altogether?

We put this question to the students themselves. A very common theme was early intervention, with over half of respondents mentioning this as something that needs more attention. This ranged from hands-on lessons in primary schools to more female participation in male-dominated A-Levels, with one respondent saying that we need to “improve girls’ participation in STEM A-Levels; 1 girl out of 21 in my further maths class, none in physics.”

“I was really lucky at school. My GCSE Physics teacher told me that I’d be really good at engineering and that I should consider the profession as a career. I was fortunate to have teachers, male and female, who encouraged me to pursue science, maths and engineering.”

By Christabel, Acoustic Consultant at AECOM

Others believe that a re-think of modules at University would encourage female graduates to continue into engineering career paths. One respondent describes the multi-faceted industry that engineering is, incorporating project management, procurement, organisation and team coordination, but how university courses don’t reflect this.

There is a momentous engineering skills shortage in the UK, which is set to increase. One student believed that the overall engineering skills shortage, rather than gender imbalance, should be the focus. “More people should go into engineering as a whole, regardless of gender.” However, this respondent did go on to add, “to get more women it needs to be presented as a viable and appropriate field for women early in the education process.”

Other industry shortages have been responded to with incentives, for example, the charity TeachFirst offering bursaries to encourage more people into teaching. One suggestion from our survey suggested a similar approach to engineering: “There should be some grants specifically for women who get into and excel in engineering courses.”

Overall, the response we received was detailed and passionate, demonstrating how relevant this issue is to both men and women in Higher Education engineering courses. Some believed that the issues lie in early education, some believed that the workplace environment puts women off, and worryingly, some didn’t think there was an issue at all. FPR Group believes that it’s crucial to ask our current students’ opinions, as the ones on the front line of our education systems. With these invaluable insights on why less women study engineering at a high level, we can begin to tackle the issue where it matters.

Read the next article here: Recruitment of Women in Engineering: Tracy de Pass

We hope our Women in Engineering Week 2018 can be a platform to encourage conversation, invite ideas and tackle this issue openly, so feel free to comment your ideas and share!